How to Make Moving Less Stressful

The rise and fall of multi level marketing

You Should Start To Clean Your House 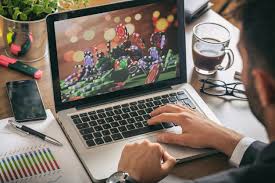 With the advancement of technology, video games are no longer bound to TVs and consoles as they are accessible through the computer and smartphones. Although it does not have a great variety of games, mobile games offer similar games that could provide entertainment for the interested players like Mobile Legends: Bang Bang. Mobile Legends offer beginner friendly and faster experience than their competitors on PC for players who are unfamiliar with MOBA games to enjoy with their friends.

In recent years, a new form of gambling has been formed through video games in the form of “loot boxes” and “gacha”. These two new forms of gambling involve players to use in-game credits to perform a roll to get a randomized item or character. The difference between both of these is loot boxes tend to focus purely on cosmetics with a few exceptions while gacha plays an important role in the game as they contain characters, weapons and upgrades that could boost their characters and progress through the story with ease. Among the two, gacha games are considered to be the worst genre as players are forced to either rely on luck or spending money to get certain characters to progress through the story or to get the characters that are aesthetically pleasing to them. Although they implement a friend support system which allows them to borrow a character from your friend, the players have to wait patiently for when the rate-up of that character will appear again. Genshin Impact is known to have one of, if not, the lowest drop rate for their highest rarity characters sitting at a 0.6% and they compensate the players by giving them a five star at the 90th roll. Despite that, loot boxes have a more significant influence over games even on gacha games themselves as it is the genre that introduced battle passes that most online games are using. Battle passes offer rewards for players who achieve points by playing the game and completing certain tasks, but higher tier rewards can only be achievable by paying a monthly subscription which also offers a boost in progression.

Some gaming companies would exploit loot boxes as a method of generating more income from their players. Electronic Arts, or EA, has been known for infamously using unethical business practices regarding loot boxes as instead of purely cosmetics, they locked certain characters at a very steep in-game price and forced players to pay money to pay loot boxes just to stand a chance to get these characters. Since they are the company that made the famous FIFA video games every year, they also implemented the same business practice into the latest FIFA games as well which is a different type of judi bola Malaysia players are expecting from. When they were summoned in court, they refuted by stating that loot boxes are “surprise mechanics” which stirred up more hate on the internet.

As video games start to become more popular, more video games will use these unethical methods to attract their players which could lead more children into unintentionally spending money into the games. Parents should start regulating the types of games their children are playing to prevent such cases from happening in the future.

previousYou Should Start To Clean Your House